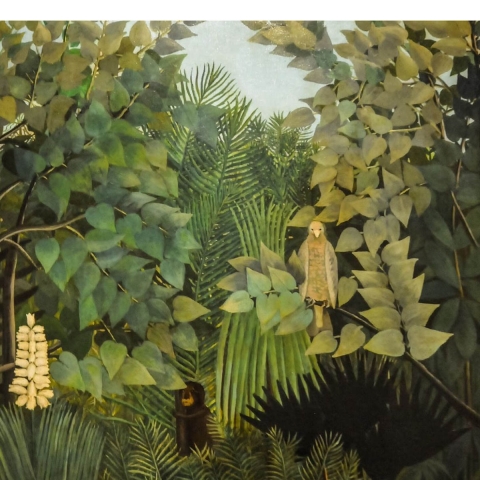 Rapé is a snuff that consists of finely ground tobacco leaves, combined with various plants, herbs, flowers and tree bark. There are many different compositions.
The base, Nicotiana rustica, is tobacco from the Amazon (also called mapacho) and many times stronger than the tobacco used in cigarettes.
Nicotiana rustica contains up to 9 times more nicotine than other tobacco plants, such as Nicotiana tabacum.

Long before Columbus set foot ashore, the Indians of South America used it as a sacred medicine. They prepared the snuff according to different compositions. Slowly but surely the use began to spread. In Brazil, people who did not belong to any particular tribe learned how to prepare the snuff themselves. Also in the rest of the world people learned how to prepare and use it themselves. It is an art to prepare good rapé. The leaves of the tobacco plant are dried in the sun and then crushed and sieved. The ashes of different plants are added, and because of this, the effect of the rapé can vary enormously.

How is rapé used?

This can be done in two different ways:

Using an instrument (called a tepi) the rapé can be blown into someone's nose. Usually this object is made of bamboo or bone and is shaped in such a way that the side that goes in the mouth has a larger opening than the side that goes into the nostril. According to the indigenous people, the way and knowledge of blowing is just as important as the composition of the snuff. With the breath, a certain force is blown into the recipient's nasal cavity.
It is also possible to blow into your own nose with a so-called 'self-applicator'. With a v-shaped blowpipe (called a kuripe) you insert one side into your mouth and the other side into your nose.

As mentioned before, the effect strongly depends on the ingredients of the rapé. The exact compositions are often kept secret by the maker. Examples of ingredients used are cinnamon, tonka beans, cocoa, alkaline ash, cloves, mint. There are also psychoactive and psychedelic additives such as coca, Anadenanthera and virola. The dose also plays a role. Rapé is seen as a purifying agent, in which a sharp, burning feeling can arise, you get a runny nose and sometimes even have to vomit or faint.
According to the Yawanawá strain, rapé simulates certain diseases, so you can learn how to deal with them.
Furthermore, the use of rapé is a way to let go of 'bad' thoughts and negativity and at the same time retrieve positivity. For traditional use, the power of rapé is supported by the 'intention' or 'wish' that is expressed.

Many Westerners come into contact with the medicinal and spiritual customs of the people of the Amazon. Ayahuasca, for example, which is forbidden by law in the Netherlands, has come to the attention of westerners, who may also come into contact with rapé, as these two are often used during ceremonies.
Also at Magic Truffle ceremonies rapé can be used as a tool so that you can get into a good mindset and prepare for your journey.

What can rapé do for you?

Nicotine is very addictive and can be found in most rapé. There is a risk of dependency. Since rapé is seen as a sacred substance, it is recommended to use it in this way. Have respect for it, use it in a ceremonial sense and don't abuse it.