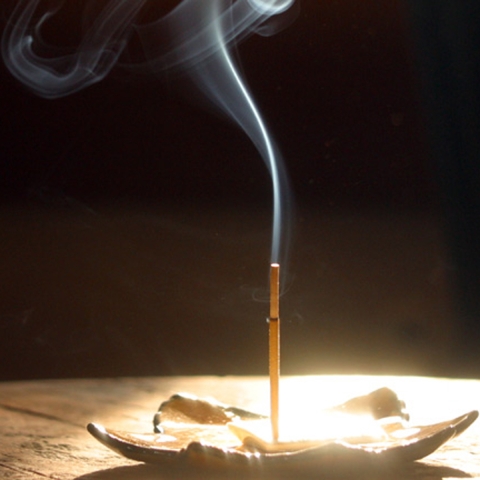 Burning incense happens in many different ways, for various reasons. Different religions have their rituals about incense, just like you and me at home. Sometimes I visited a friend and  in her room the incense smoke was so thick it made it difficult for me to breathe. For her it was very normal to always have a cloudy and fragrant room.
Incense can be used when you want to meditate, chase away insects, prepare for a psychedelic journey, for aromatherapy, as a way to provide the room with a nice smell (or as a way to dispel stench), to please the gods...
Incendere means 'burning' in Latin, and this is where the English word 'incense' comes from. In Dutch incense means 'sacred smoke'.

Incense contains various aromatic substances, including essential oils of different plants, resins, herbs and flowers. The ingredients vary per culture, per era. It is estimated that incense has been around for more than 3000 years before Christ. Perhaps even earlier, when man began to play with fire and discovered that burning certain plants and wood provided a pleasant smell. Furthermore there is a difference between indirect-burning incense and direct-burning incense. The first needs an external heat source, which allows the smell of the incense to spread. Direct-burning incense only needs to be lit, and then continues to glow, when the flame is blown out. The mixture of aromatic substances is processed around a stick, as a Dhoop stick, or made in the shape of a cone. Added to that are materials that connect the different plant substances and make sure that the incense keeps smouldering. These are for example arabic gum as a binding agent, charcoal and wood dust as a burner and oxidizer.
Originally, materials were used that were available locally. In North America, for example, the indigenous people used a lot of sage and ceder.

Worth as much as gold

At a certain point a veritable Incense Trade Route was created, which ran from Egypt and the Levant through northeast Africa and Asia to India. In Ancient Egypt, incense was a precious commodity, worth as much as gold! It was seen as the most important commodity. As far as meaning was concerned, there was a lot attached to it, the smell could repel the negative, offer protection, purify and create a pleasant atmosphere. It also favoured oracles, for example when a ruler was looking for the right solution to a problem.

As mentioned earlier, many religions and cultures around the world have their own view on incense.

Christians: They have been using incense in their churches for centuries, to harmonize, to purify the air. The rising smoke represents the prayers that can travel to God and honor the saints. Known is the story of Jesus, where the three kings brought incense, gold and myrrh with them.

Smudging: Originally from North America, 'smudging' is a way of purifying sacred and spiritual objects such as certain (precious) stones and keeping evil at bay. The incense is hold close so that the smoke can smudge along the object.

India: This is where the traditional incense sticks made of bamboo come from. The original use of incense, or agarbathi, consists of a so-called masala mix of various spices, including amber, myrrh, frankincense, halmaddi (the resin of a tree). A good example of such a traditional Indian incense is Nag Champa.
The oldest writings on the use of incense in India come from the sacred writings, or Vedas. Within Ayurveda (traditional medicine) the making of incense is mentioned and the way incense is made nowadays finds its origin within this doctrine.
Within Hinduism incense is an important part of their rituals and as the most important sacrifice during prayers.

Inhaling too much incense can be harmful to your health. It is therefore recommended not to use too much incense and to aerate the place where you use incense well on a regular basis.
From a psychological point of view, the smell of incense can have a calming effect and help you get into a state of 'zen'. This can bring you into a state of meditation, for example when you pray or do yoga.

€ 2,00
View all products in our category Incense

Nederlands
Are you 18 years or older?