Kombucha Fermentation: Good for you! 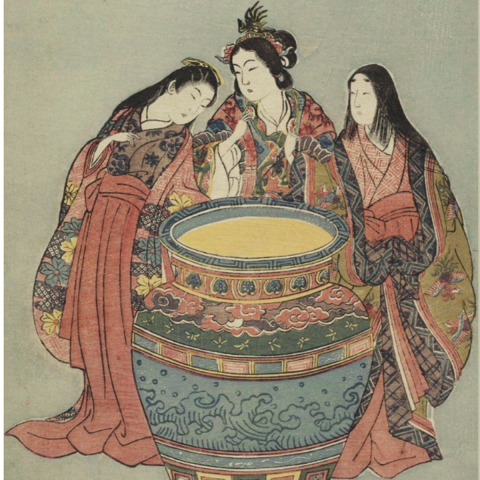 In recent years a lot of trends have emerged from all sorts of different places. It is nice to see how people can taste these 'new' habits and ideas and make them their own if they like it. A hype has a negative connotation, because it often seems to remain fleeting and superficial. Sometimes it does, and people spend masses of money on something that is put away in the closet a month later. That's a pity of course, but I certainly see it as something positive when people are open to something new, especially if it can benefit their health.
Sometimes a trend goes on so long that it becomes more and more established. A good example of this is vegetarianism and veganism. I can only applaud it when people think twice before putting something in their mouths. On this trend I'm sailing along.

Another habit I have made my own is brewing Kombucha. I learned to drink this when I volunteered on an organic farm. The tantalizing taste reminiscent of champagne was delicious and I liked to drink it because it refreshed me so much.
How exactly it was made was never clear to me, the owner insisted on making it herself. Because we as volunteers were allowed to cook and such, I assumed that it was very complicated to do.

Now, a few years later, it strikes me how Kombucha is a word that seems to pop up more and more often. In the shop I've come across quite a few cookbooks about this, and about fermentation in general.
Since a few months I make my own Kombucha and it's not that difficult at all! It does take some time though and you have to 'harvest' the Kombucha in time, because otherwise it can become much too sour and you are actually left with vinegar.

Kombucha is a slightly sweet, sour refreshing drink made with sweet tea. A SCOBY is added to this tea. This stands for (a whole mouthful): Symbiotic Culture Of Bacteria and Yeast. Usually this SCOBY produces a cellulose-like mat that floats in the brew and looks like a thick, smooth pancake. It is also called 'tea mushroom'. In order to be able to make Kombucha you need to get hold of this bacterial and yeast culture. I got it from someone else. That's how it usually goes with Kombucha and that's what I like about it: it's passed on from person to person. Nowadays it is also possible to buy Kombucha in health shops all over the world. You can't just create it yourself. The exact beginning of this unique drink remains mysterious.

Kombucha was created around 220 BC during the Tsin Dynasty in northeast China. Here the drink was praised for its detoxifying and energy-giving properties.
Around 414 A.D. the Japanese physicist Dr. Kombu brought the tea to Japan and used it to treat the stomach problems of the ruler Inkyo.
The drink began to spread more and more, to Russia and then to other Eastern European places. Over the years, the drink became more and more popular. During the Second World War there was a shortage of tea leaves and sugar and its use was largely stopped. In 1960 Kombucha was back on the road and scientists in Switzerland indicated that the drink, like yoghurt, could have health benefits. Today, Kombucha is sold and drunk worldwide.
The reason I started drinking Kombucha was because I really like it. The health benefits associated with it came in second place.

At this moment I combine the fresh drink with the Warrior capsules of Living Nutrition. To these are added the medicinal power of Cordyceps and a lot of other strengthening ingredients.

Health benefits of Kombucha according to users

From my own experience I can say that kombucha seems to work very well for me. I feel energetic and strong. I also like to make it. I take the time for this every 1 to 2 weeks. It is very important that you work very sterile, otherwise unwanted bacteria can get into your brew. I always rinse the spoons and bowls I use with boiling water. I wash my hands thoroughly and make sure that all soap remains are gone. Soap can also ruin the Kombucha culture.
If you have obtained a SCOBY yourself, you can read below how you can make Kombucha yourself.
Just like cultivating your own magic mushrooms, there is nothing more satisfying than taking care of a living organism, which then bears its 'fruits'. Believe me when I say that a magic mushroom trip is really different if you have cultivated them yourself!

Boil the water, let it cool a little and then let the tea leaves soak in it for 5 to 10 minutes. Then filter out the tea leaves.
I let the tea cool down until it is still a little lukewarm, this takes quite a long time. This is because honey should not be added to hot drinks, as this reduces its healing properties. If you use sugar you should add it when the tea is still hot, so it can dissolve.
When the drink is well mixed with the sweetener and has cooled down, you can put it in the glass jar, together with the Kombucha (also called the starter). This may or may not include a SCOBY mat.
Cover the glass jar or with a clean towel or linen towel. Use an elastic band to secure them well. The culture should be able to breathe, but no flies should get into it.
Then you put it in a place where it can ferment quietly, at a temperature preferably around 22 degrees Celcius. When it's colder the fermentation process will take longer, when it's hot it will be finished quicker.
When you have tasted that the Kombucha tastes good and is slightly sour, you can harvest it.
Always have a part left over to prepare the next batch.
You need good stirring bottles to pour in the drink. The liquor will produce fizzy in the bottle, and can be put away in the dark for a few days (for example in the cellar).
Then you can put the drink in the fridge and it is ready to be drunk!
I often add pieces of fruit, fruit juice and herbs in the bottle for unique flavours.