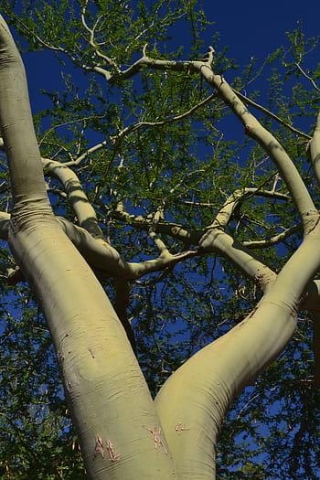 What would it be like to be able to smell like a dog? If I take my four-legged friend for a walk in the area, it starts as soon as I close the door behind us. She sniffs with great interest at paving stones, wheels of cars and passers-by. The smells she absorbs tell her all sorts of things: the latest news, messages from other dogs in the neighborhood, if the man who just passed by was anxious or angry... As a human being with 5 million olfactory cells, my ability to detect smells is little compared to the capacity of a German Shepherd, for example: with about 220 million olfactory cells, he can even detect whether a smell comes from the left or from the right; this is called 'stereo smelling'.

Still, I can consider myself lucky with a functioning olfactory organ, with which I can detect pleasant and less pleasant smells. There are a number of fragrances that have always had a deep effect on me and that immediately bring back memories when I happen to pick them up somewhere. For this blog I want to focus on a specific scent that has had a great attraction to me from an early age. This sweet, natural scent always gave me a very pleasant feeling that I might best describe as 'feeling safe'. When I felt anxious or insecure and this smell entered my nostrils, I calmed down and felt as if a warm blanket had descended over me. What exactly this smell was, other than a certain form of incense, only became clear to me later.

As a present, not so long ago someone gave me a parcel containing a few pieces of wood. Because I don't smell as good as a dog, it took a while before I knew what I had received. The smell that came from the package was familiar to me.
When I lit a piece of the wood, it wasn't as easy as with an incense stick: it took longer to catch fire. After I had blown out the flame, a ring of smoke spread and immediately filled the room with the sweet smell. I closed my eyes and my breathing calmed down. For a moment I experienced a strong sense of peace. The smell seemed to tell me: "why worry?”

Palo Santo in Spanish means: holy wood. The tree where this wood comes from is native to South America and then specifically to Mexico, Costa Rica, Colombia, Ecuador, Venezuela and Peru. The official name of the tree is Bursera graveolens. The tree belongs to the same family as the tree species from which myrrh and frankincense are extracted, two highly fragrant resins that are used in various types of incense, scented candles and oils. The scent of Palo Santo can be described as a rich blend, with notes of pine, mint and lemon. For some, the sweet smell is reminiscent of roasted sugar.

Not only was the wood used to stimulate the nose, it clearly also had an important spiritual function. As the name says, this tree was considered sacred and treated with respect. According to traditional usage Palo Santo was used to drive away 'bad energy'.

Also in Peru there is a very long tradition in which the tree is used by humans because of its smell. We can go all the way back to the time of the Inca empire. The shaman lit the wood several times in order to 'break through bad thought patterns of the participants in the ceremony'. Palo santo was used to clean the energy field around a person. This field absorbs and repels external emotions and energies. Evil spirits and misfortune also disappear in this way.

Finally, Palo Santo is used as a way to expel parasites. Mosquitoes don't like it!

Its use could be compared to the way the indigenous people in North America use sage to cleanse and cure.

Ways to use Palo Santo

Palo Santo can be used to get rid of bad energy. Maybe you feel how a certain negativity brings you down. According to the people of the Andes, lighting Palo Santo can help create an environment of creativity, love and prosperity. When you have disagreement with someone, quarrel with a family member, or feel irritation towards your neighbor, the scent of Palo Santo can be a way to find peace within yourself and extinguish the heat of conflict or emotion.

Palo Santo has been used for centuries as a way to clean a room to open a ceremony. Whether you're going to smoke a joint with friends, just had a cup of Magic Truffle Tea or want to meditate, lighting Palo Santo is a good start to get into the now and let things go. Fears about the future or regret about the past are emotions that can trigger a whole load of negativity. Especially before you start a trip it is important to get into the right mindset, where you don't let yourself be influenced by these kinds of illusions. The little devil that whispers worries in your ear can be pushed aside with the help of Palo Santo, so that you can start a good journey.

Setting an intention can be a good way to get your energy up and give more direction to the power of the wood. For example, you can direct the stick through your bedroom to chase away an evil dream and replace it with an energy you would like to allow into your life, such as gratitude and love.

The scent of Palo Santo can also be used for physical complaints such as headaches and stomach cramps. In traditional use Palo Santo is used to strengthen physical functions and increase resistance. It has a healing effect.

We live in a world where many of nature's beautiful things are threatened. So is Palo Santo. There are many companies that sell wood that comes from felled trees. The special Bursera graveolens tree can officially only be used when branches have fallen naturally, or when the tree has died. The Peruvian government regulates this method of harvesting, just as the indigenous people did. Whether it is actually done this way everywhere is another story. Then the wood would have to rest in the forest for about 5 to 10 years before it could be used. In this way, the aged wood acquires a strong aroma, which is due to various terpenes, such as limonene and alpha-terpinole. At present, the tree is not yet threatened with extinction, but the threat is close because of the popularity and felling of healthy trees and destruction of the natural habitat. That is why it has been added to the list of the International Union for Conservation of Nature. There is also a lot of 'fake wood' in circulation: wood that resembles Bursera engravings, but that are not actually Bursera. Sometimes these fake sticks are sprinkled with something else.

To make sure your purchase comes from a reliable source, it is best that you do some research. Investigate whether the piece of wood you light has travelled a clean path. The Palo Santo I got a while back came from a source unknown to me. I have not turned down this gift and will use it for special occasions. By the way, these sticks last super long! When I buy Palo Santo next time, I will bring out the inner tracking dog in myself. I'd also like to pay a bit more, as long as I contribute to a product that is as nice as the smell.