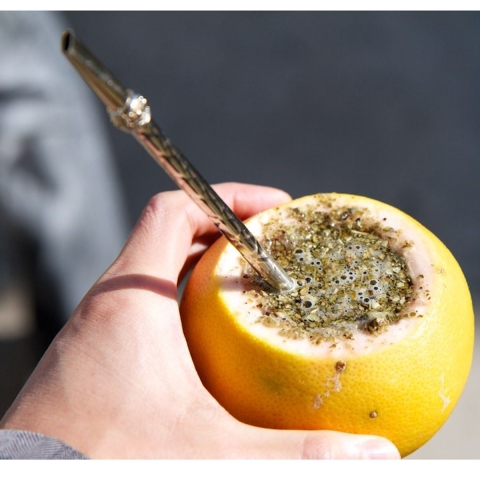 countries like Paraguay, Uruguay, Argentina and some bits of Bolivia and Brazil, Yerba mate constitutes one of the pillars of their culture. In Argentina, Paraguay and Uruguay mate has even the title of ‘national drink’. For these countries, Yerba mate is more than coffee or tea and it symbolizes an entire ideal of friendship and connectedness.

While different communities have different myths for the origins of the yerba mate, all of them agree that the plant was a gift of the gods. This understanding has some sense when one realizes the benefits that the yerba mate brings not only to the social life of different communities but also to their overall health. Yerba mate contains several beneficial compounds, including xanthines, caffeoyl derivatives, saponins and polyphenols. Xanthines act as stimulants, caffeoyl derivatives form the main antioxidants found in the plant, saponins are the anti-inflammatory and cholesterol-lowering compounds and polyphenols is the group containing oxidants linked to a reduced risk of many diseases.

There are a multitude of different ways in which people can drink (or eat) the yerba mate. The most popular and simplest way to prepare yerba mate is via an infusion with either hot or cold water. Other forms of preparation may include milk or juice. For the most adventurous, it is even possible to make yerba mate cake and ice-cream! Down below I gather some of these recipes, which you may or may not want to follow to prepare a delicious yerba mate drink (or snack). Beware, some of these recipes require a bombilla, a metal straw used to filter the yerba mate when drinking.

Second, cover the open side of the cup and shake the yerba mate inside it for a few seconds. The idea is that the larger branches and leaves in the mix end up on the bottom of the cup and the more powdery mix ends up at the top. Once you stop shaking, rest the cup at a 45° inclination, so that a cavity is formed in a section of the cup.

Third, slowly pour some lukewarm water, at around 50°C in the cavity formed previously. The goal is to moisture the lower part of the cup where the larger leaves and branches are. By doing this, you ensure the yerba mate starts to slowly release its compounds.

Fourth, insert the bombilla in the wet area of the cup and rest it on the side of the cup. Make sure the bombilla is firmly grounded as you shouldn’t move it around too much as you drink it.

Fifth, you may start drinking the yerba mate. Pour hot water (75-80°C) in the area where the bombilla is and try not to wet the yerba mate in the upper bit of the cup. You may do this process for as long as you wish. The more you drink, the more you need a refill. When you feel like the taste is not as intense anymore, you may add more yerba mate following all the steps mentioned above.

As an addition to this, you may choose to add some sugar or lemon juice to the water. Some yerba mate purists shall certainly be alarmed at this action but don’t be put down by their complaints, lemon juice and sugar are definitely not such a heresy as they might make it sound.

Another traditional way to consume yerba mate is via a milk infusion. To prepare this, you simply follow the same steps as that of a water infusion but substituting water for hot milk (75-80°C). For an extra flavour, you may choose to add other ingredients such as cinnamon, cloves or grated coconut.

A less traditional way to prepare yerba mate is by using a grapefruit instead of a cup to add a more citric flavour to the drink. To do this you must pick a reasonably large grapefruit and make a hole in its centre. The hole should be big enough for it to contain the yerba mate and the water that you will use to make the drink. Once the hole is made you should follow the same steps mentioned above.

If you don’t feel like making a hole in your grapefruit, you might as well just use grapefruit juice or some other form of juice as a substitute to water and follow the same steps mentioned in previously.

An even less traditional method to prepare yerba mate is by using a coffee machine. If you have one of those simple coffee machines that work by simply filtering the coffee powder with a filter paper, then you can also try this method. In this case, all you must do is to substitute the usual coffee powder for the yerba mate. Once ready, the drink should have a somewhat reddish colour, similar to that of black tea.

If you don’t feel like drinking but would still like to have a taste of yerba mate, the following section is for you. In principle, it is possible to use yerba mate powder as an addition to all sorts of recipes and (really) creativity is the limit for experimentations with yerba mate in the kitchen. The following recipes are just two out of the many possibilities available out there.

To make yerba mate cake you will need the following ingredients:

The preparation in itself is quite simple. First, you must beat the butter in a bowl until it becomes very creamy. Then, slowly add the sugar, the eggs and the orange zest in this order. Keep beating the butter throughout this process. Finally, add the (already cooled) mate and milk infusion and the leavening flour, in an alternate fashion. Keep beating all the ingredients together until everything is well mixed.

Once the mix is ready, pour it into a 24 cm buttered and floured mould and bake it at 160º for approximately 45 minutes. After the 45 minutes, make a few holes with a toothpick and pour the icing on top of it.

To make the icing all you need to do is mix all the ingredients together (apart from the powdered sugar). Make sure that you use only the orange part of the zest and not the white to avoid a bitter taste. Once you pour the icing and unmould the cake you may sprinkle some powdered sugar on top.

The main ingredients for the yerba mate ice cream are:

To prepare it you must first boil the 3 cups of milks with the 3 tablespoons of yerba mate. Once boiled, strain the mix. Separately, beat the egg yolks with sugar using a mixer or blender and little by little add the milk and yerba mate mix. Once again, heat up the mix and remove it from the fire just before boiling. Let it cool, add the milk cream and stir the mix. After stirring, pour the mix in a bowl and let it cool in a refrigerator. To prevent the cream from crystallizing, beat the mix every now and then.

The yerba mate recipes presented here are by no means a complete list of all the possibilities of what can be done with yerba mate. If you feel like experimenting more, making some changes or coming up with entirely new recipes you are more than welcome to do so. The yerba mate world is a never-ending sea of new discoveries. To keep up with the yerba mate’s tradition and make of it a symbol of friendship maybe you could invite some friends over to explore new yerba mate recipes, have some yerba mate drinks and share your thoughts on the very interesting yerba mate traditions.