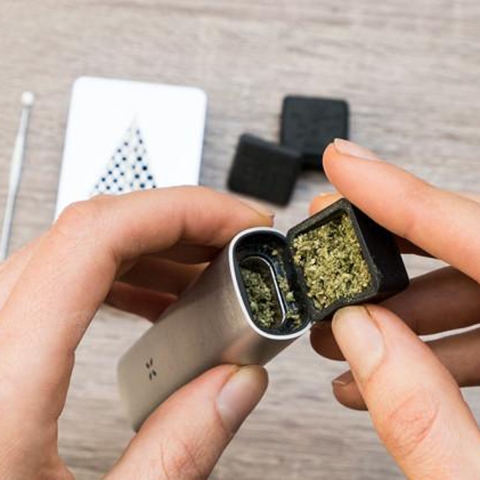 Determining the right temperature is an art and can, when you have mastered it, optimize your vapour experience.
Did you know that lighting a joint releases only 10% cannabinoids and 90% toxics (PAHs)?
The scientific studies do not lie: burning cannabis and then inhaling it (often in combination with tobacco), is not healthy and also very expensive, because you burn a large part of your precious herb immediately.
A vaporizer, on the other hand, can contain up to 95% cannabinoids and has little or no combustion products.
Cannabinoids are powerful substances in the cannabis plant, which all have their unique effect and boiling temperature. By not burning the substances but heating them until they start cooking and can be inhaled in the form of vapour, you get the most out of your cannabis.

Attention: Although some of the following cannabinoids require temperatures above 200°C to vaporize, your vaporizer at this temperature may run the risk of burning, and this should be avoided.
Depending on the drought, weed may start to burn at 200 degrees Celsius. It can burn around 230 degrees Celcius.

Which effect do you choose?

The most famous cannabinoid. Works both euphoric and analgesic and creates an enormous relaxing feeling.

Medical users are looking for this cannabinoid. This substance fights feelings of anxiety and paranoia and partly counteracts the effects of THC.

This cannabinoid is very similar to THC but is more stable and less psychoactive.
A special feature is that the effects work very well against nausea and vomiting.

Found in small quantities, but nevertheless has a strong effect of anesthesia and breaks down THC.

The properties of this cannabinoid are anti-inflammatory and antifungal.

THCV has been shown to moderate the psychoactive effects of THC, but more research is needed.

€ 89,00
View all products in our category Vaporizershop

Nederlands
Are you 18 years or older?