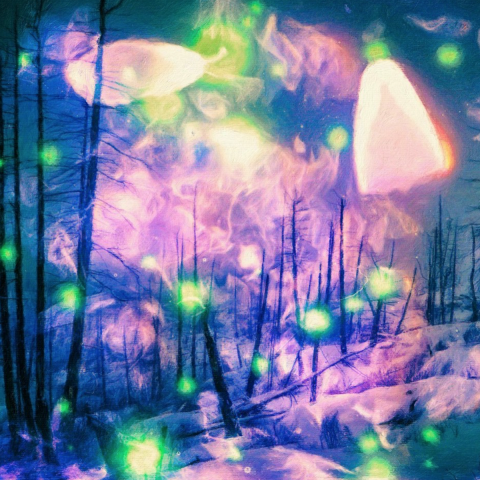 This was during winter, or maybe it was the beginning of spring. It was cold, but one could sense the smell of flowers. I had decided that that day I would try magic truffles for the first time. I don’t think I had ever tried any psychedelic before, but somehow, I felt like I was about to enter a world l had known for a long time. The idea was to take them during the night. A friend of mine would bring them to my place and together we would take them and walk towards the river. Before taking them, my friend warned me about the potential discomfort I could feel in my stomach and suggested I could maybe drink some ginger tea before chewing them. I drank some tea, ate some cookies and started the adventure.

While still in the house, me and my friend talked about previous experiences. She shared with me some of her otherworldly escapades while I asked about how it all felt like and what I should prepare for. She told me that each experience is one of a kind and that I should just make sure to take with me everything I needed to feel comfortable. I took with me some blankets, put on my comfy onesie and got some water and fruits for the way.

With the truffles already in our bodies, we set our feet outside. A rush of fresh air filled my lungs and a thought occurred to me: next time I step through the door I now leave behind, I will probably be a slightly different person. That’s what truffles do to people, I thought, they show them different worlds and then leave them to explore their own. I was ready for that exploration.
On our way to the river, I couldn’t contain my excitement. I remember being very talkative, but I don’t quite remember what it was that I was talking about. It probably doesn’t matter much, I was just talking for the sake of talking. I needed to vent my enthusiasm. I had butterflies in my stomach and I could feel a wave of energy flowing through my body.
As we got closer to the river, the patches of concrete became softer and softer until all there was around me was wet grass. I still remember the smell of the grass, the petrichor scent entering my nostrils and forming rivers inside me. As soon as we arrived at our destination I insisted on getting rid of my shoes. It just wasn’t right to be in such a place with the feet far from earth. Just as my lungs needed breathing, my feet needed the touch of soil.

As we got our things out and started to settle, I realised things weren’t what they were before. The cloth we had brought looked like an intricate map, covered with hills and valleys. The water bottle was a container for some magic glowing substance and the fruits were simply all planets themselves, each with its own geography. The absurdity of it all jumped out of my mouth as I burst out laughing.

My friend was still getting used to this new reality. Unlike me, she had been there multiple times and while still bemused by it all, absurdity wasn’t the first thing to jump out of her mouth. It was awe what made the first sound. As I came to realise, the more truffle experiences one has, the more reflective one becomes regarding what is perceived. Or at least that is how it went for me and my friend. What for me was a world of absurdities, for her was a world of messages and understandings.

We both sat down and stared at the river. We had spent such a long time immersed in the world of cloths, fruits and grass that the sight of the river almost took us aback. Its immensity was close to overwhelming. We had gone from what seemed like ripples of alternative realities within our own to a many-folds distant world. The river had a life of its own, and we had to be respectful.

For what it seemed eternity, we stayed silent. The river had to talk. And so it did. Its massive body danced right in front of our eyes. Its skin, breathing and lifting towards the sky. Above the river, light balls would reflect the river dance on its own bodies. Down below, the river would reflect the lights. Each light ball slowly became a cocoon and inside each cocoon, human bodies seemed to grow.

As the bodies grew, fed by the river, their cocoons became smaller and smaller until it all burst. There was light everywhere, and then no more humans. A different creature seemed to emerge from the waters. Bigger and stronger it would swerve through the water ripples and chant together with water and light.

Me and my friend felt attracted by it, and so we decided to dip our feet in the waters. We slowly crawled towards the river-side, pulled our trousers up and carefully allowed our feet to feel the water. As the water droplets entered our pores, the river gained access to us and so a flow of memories came to our minds. For some time, I seemed to have become part of the river. I felt like its daughter, carrying in my DNA the memories of my progenitor’s life.

But suddenly the cold struck me. I came back to my body and realised it was time to go home. My friend was already sitting next to our bags, a very thoughtful complexion drawn on her face. I walked towards her, sat by her side and picked one of the mandarins laying next to her feet. Side by side we stayed for a while. She, breathing calmly and me slowly munching on the mandarin.

At some point, we both just stood up and started to walk. We put everything back into our bags and headed home. On the way home, here and there, another world would show itself to us. We’d stay mesmerized, staring at the intricacies of the spider web, the branches on the trees or the bushes near the fence. I felt like a kid and my friend, my accomplice.

I was still barefoot and from grass to concrete, I felt the effects of the truffles slowly fade away. By the time we reached the door we had left behind, the thoughts I had had just as we crossed it seemed like a far off dream. Coming back inside, all the different worlds we had explored by the river seemed to condense and just as if they had become tiny marbles, I felt each of them being swallowed by my brain.