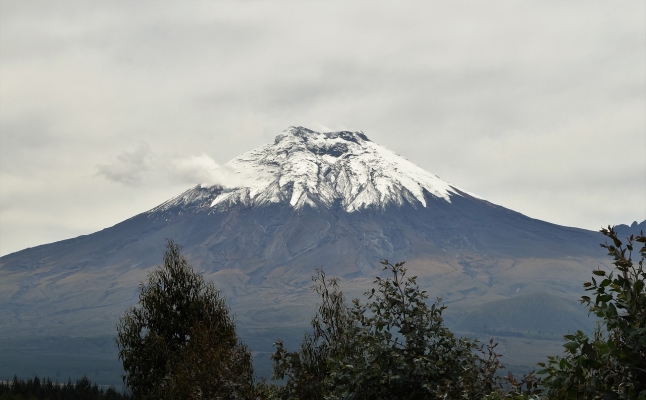 The Volcano Hybrid Vaporizer: all you need to know

Vaporizers are all the rage these days. There is now a wide range of devices which allow you to consume cannabis in a safe and effective way while enjoying the maximum health effects. The brand that, after all these years, still comes out on top, is of course Storz & Bickel.

In this blog I will focus on the king of vaporizers: the Volcano! This robust tabletop model is considered the gold standard and is used within science for research purposes. Also users, recreational or as patients, still see in the Volcano the best choice. Throughout the years the brand has made more improvements and we have arrived at the latest version, the Volcano Hybrid. In terms of robustness, however, nothing has changed.

A little history about Storz & Bickel

Back to 1996, in Germany, when a graphic designer named Markus Storz started developing herbal vaporizers. This was back in the days when vaping was not known at all.

A few years later, as developments continued and new knowledge was gained, the Volcano vaporizer was released to the market in the year 2000. This was the beginning of a new era, in which it had never been easier for users and patients to vaporize cannabis in an effective way, thanks in part to the detachable balloon. But more on that later.

The Volcano vaporizer was the very first decent vaporizer model to hit the market and soon everyone had heard of it. It became the gold standard in no time. The appearance of the device also caught on: robust, with a clear LED display and simple to use. Experts and scientists still use the Volcano vaporizer most often for studies.

The demand for these rock solid German vaporizers continued to rise and with it the company grew. In 2002, Jurgen Bickel joined and the official company STORZ & BICKEL GmbH & CO.KG was founded.

The company's growth continued all the way to America, where they created a second base and quickly gained fame. Here the vaporizer industry grew and prospered, with new innovative models circulating in the market.

In 2007, the brand released the Volcano Digit, the first model that could be electronically controlled. Two years later, the company received a certificate guaranteeing the safety of their products. With this certificate, the Storz & Bickel products were recognized as medical devices. Officially, they now became a company that makes "medical grade" vaporizers.

As you can see in the Sirius Vaporizer range, there are some more models released by Storz & Bickel. For example, you still have the Plenty vaporizer, released in 2011. This model is known for its outstanding flavor experience, thanks in part to its extra-large chamber and clever heating and cooling system. 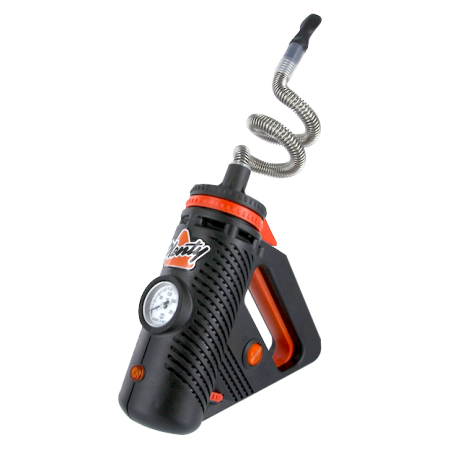 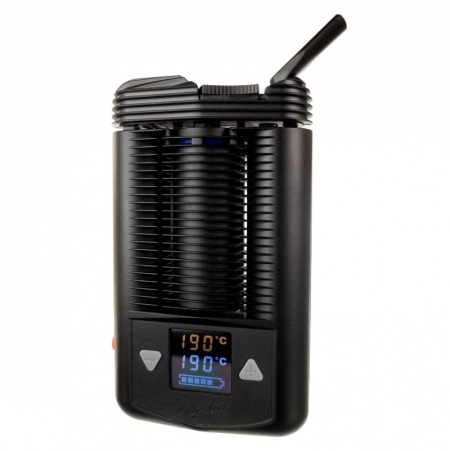 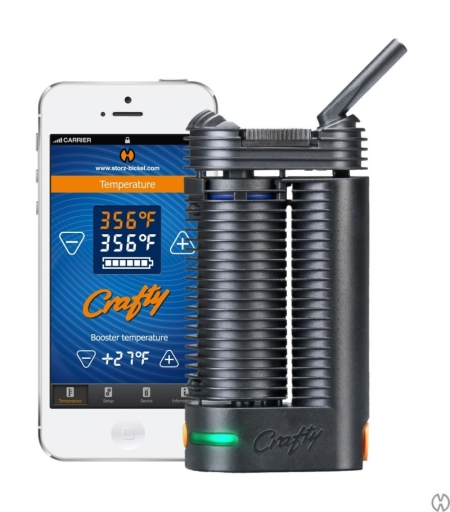 Then there are the Mighty and the Crafty. Do I even need to make an introduction to them? If you're looking for a handy vaporizer that gives you the best vapor experience, you're in the right place with both of them.

It all started with the Volcano. Released in 2000, this model has become a true icon. Meanwhile, we are in the year 2021 and Storz & Bickel has gone through an evolution, refining the technology of the Volcano even more.

The classic Volcano offers you everything you need to have a strong vapor experience, as much as you want. Hence, it is very popular among users who use high doses of cannabis for medical reasons, for example, to relieve pain. Also, the Volcano is strong enough to enjoy with a group together. Of course, in this covid 19 period that we are currently in, it is not recommended that everyone exchanges saliva with everyone else. Storz & Bickel have introduced handy mouthpieces onto the market, which make it possible to use cannabis together with a vaporizer without exposing yourself to too much risk.

You'll be right up there with the times when you choose the Volcano Hybrid. This latest vaporizer model is the successor to the original Volcano. The Volcano Digit came before the Hybrid and was the interim model that digitalized the analog vaporizer.

Ultimately, this is a matter of personal convenience. As with many things, sometimes an "old" version is still highly desirable among hardcore enthusiasts. Nothing against the classic Volcano. Even without an LED display, you can perfectly set the desired mode and personalize your experience.

Yet the latest version, the Volcano Hybrid, is more advanced and has a few surprises up its sleeve.

First, you can use the Volcano Hybrid using a special app. This makes it possible to customize the device to your liking. Unfortunately, it is no longer possible to download the app from the Apple store. With an Android phone, MAC or computer, it is possible to use the app to manage your device. 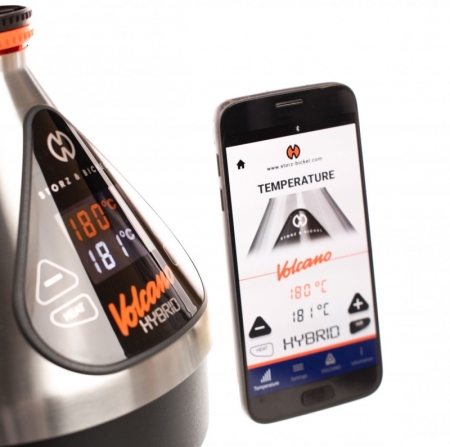 The temperature control of the Volcano Hybrid is even more precise than the classic model, which remains accurate within 5 degrees Celsius. The newer version stays within 1.5 degrees Celsius.

The Hybrid gives a more precise control over the desired temperature. Also, with this model you can go up to only 40 degrees Celsius, while the classic model does not go below 130 degrees Celsius. Quite a difference!

Vaporizer with balloon and mouthpiece

With the Volcano hybrid you have the option to choose the balloon or the tube with mouthpiece. Both methods have their advantages. 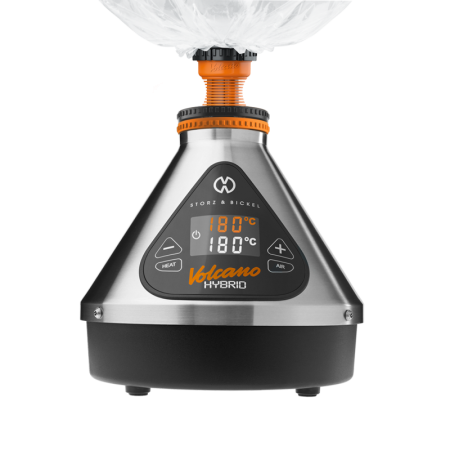 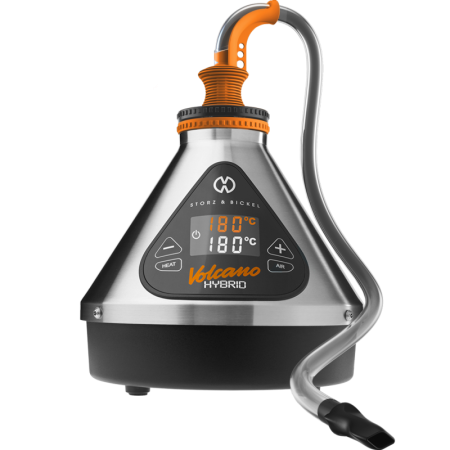 The hybrid vaporizer is super quick to heat up. In just 40 seconds it is ready for use. With the classic model it takes several minutes before it reaches the right temperature. This is partly due to the improvements made to the double helix heat mechanism.

Most vaporizers heat your cannabis either by convection or conduction. The hybrid is a fusion of these two ways, for the most optimal experience.

How do I use my new Volcano Hybrid?

Once you have purchased your brand new Volcano Hybrid, it is time to finally start using it. It's going to be a lot of fun, especially if you take good care of it.

It is important to always heat up your vaporizer for the first time when using it, without putting any herbs in it and without inhaling. Let it vaporize for about 10 to 15 minutes without doing anything else with it. In this way, the plastic and synthetic aromas that may still be present in the device will evaporate. After this, you will be in an optimal taste condition.

This is not only the case with the Volcano Hybrid, but any electronic vaporizer that you just take out of its packaging.

Step one: Prepare your cannabis

Now it's time to prepare your cannabis and put it in the herb chamber of the vaporizer.

The balloon is the special asset of the Volcano vaporizer.

The balloon is a great way to maintain good control over how much vapor you use and at what rate. When you are with a group of friends, everyone can have their own balloon and control how fast it should go at their own pace.

Or use the tube system

A second way you can use the Volcano Hybrid is with what is called the tube system, or a hose with a mouthpiece that you attach directly to the device. Instead of turning on the vapor system, as you do with the balloon, you use your own lung capacity to inhale the vapor through the mouthpiece.

These two modes of use make for a "hybrid" vaporizer, which can be used in two ways.

As an avid cannabis enthusiast, the Volcano Hybrid is a great purchase!

Easy Valve € 99,00 Student Discount Not in stock Possibly in stock in one of our shops
Storz + Bickel 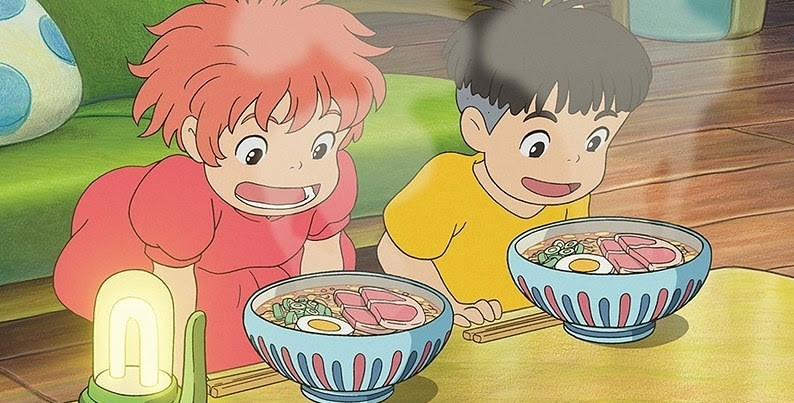 Blog Cannabis Munchies because of weed, what does that really mean? Getting the munchies from cannabis, has it happened to you yet? The munchies is a phenomenon that many stoners experience from time to time and can be [..] 04-06-2021 9 minutes 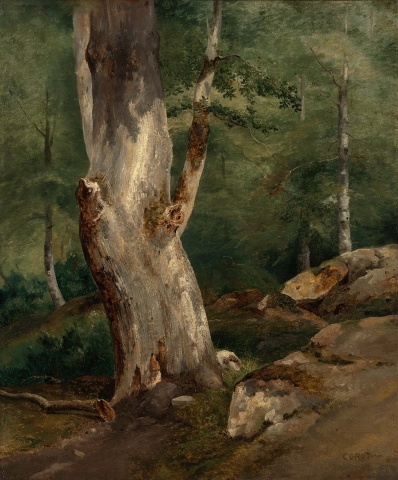 Blog Smart Products Tripping on LSA from Hawaiian Baby Woodrose Somewhere down in the valley we heard the sound of a bell. We looked at each other: were we almost in the inhabited world? Only now did I realize how [..] 27-05-2021 7 minutes 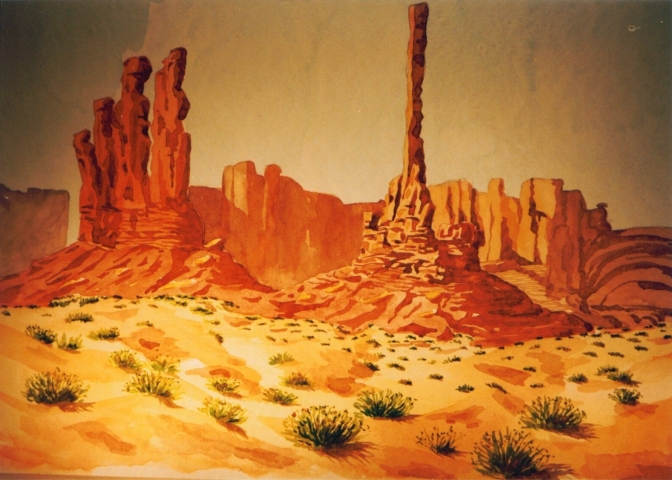