Muira Puama is an aphrodisiac native to the Amazonian forest of Brazil. It also grows in Suriname and French Guiana. It is a small tree that can grow up to 5 meters high and produces small, white flowers. These spread a pleasant scent reminiscent of jasmine. Different parts of the tree are used, but the most interesting part is the bark. From this, an infusion or tea can be made and drunk for its medicinal and aphrodisiac properties.

Another name for this remedy is therefore ‘potency wood’. Men who want to improve their sexual performance, strengthen their stamina and get a better erection like to use Muira Puama. Meanwhile, the fame of the remedy has spread from South America to other areas of the world. Commonly used names are marapuama, pauhomen and muiratam.

Muira puama is composed of several substances. Science began to delve into its chemical composition and efficacy around 1920. To this day, new compounds are being discovered. Research to date shows that Muira puama consists of several active components. The roots and bark of the tree are rich in fatty acid esters, essential oils, including beta-caryophyllene and alpha-humulene, plant sterols, triterpenes, including lupeol. In addition, there is a recently discovered alkaloid that science has named muirapuamine. Muira puama also contains sesquiterpenes, monoterpenes and novel alkaloids.

Muira puama has a long history of traditional uses. Different parts of the tree are used as medicine, but especially the roots and bark are well known. Among the indigenous people of Brazil there are several known uses. One example is the preparation of a liniment made from the roots of the tree, which is used for massages and baths to treat conditions such as beri-beri (a great weakness caused by a lack of vitamin B1) and paralysis. A tea made from the roots and bark of the tree is used to treat the flu, rheumatism and digestive problems.

Muira puama has long enjoyed a reputation for being sexually stimulating. In Brazil, Muira puama is praised as an aphrodisiac. For men, its efficacy is of interest because of its stimulating properties that can facilitate the attainment of an erection. Improved blood flow also increases sensitivity. Because of its relaxing effect for the penis, it is easier for the man to get and maintain an erection.

Drinking a tea or decoction after some time causes more sensitivity within the area of the genitals.

Research shows that Muira puama can help treat erectile dysfunction and impotence. Two studies done with humans showed that the libido was also increased. The study was done with men who had little to no sexual desire and problems getting or keeping an erection. Of the 262 male participants, 62% reported that the extract of Muira puama had a "dynamic effect" on their desire for sex. 51% of the participants reported that it had a beneficial effect on getting or maintaining an erection. A second study done showed that Muira puama had a therapeutic effect on the sexual performance of 100 men. On a psychological level, Muira puama had a beneficial effect in the subjects who all had problems with sex. For this study, an extract of Muira puama was used and it was administered daily in an amount of 1.5 grams per day. The final results showed 85% of the participants had a greater desire for sex than before the study, 100% had sex more often and 90% saw improvement in getting and maintaining an erection.

There is also no scientific evidence that Muira puama possesses the power to enlarge the penis. However, increasing the erection and lengthening the erection will make the penis harder and therefore automatically larger and firmer. This is because there is better blood flow. The blood vessels in the penis dilate making it easier to have an erection.

Help with the menopause

Muira puama is also used as a medicine that helps with certain hormonal problems and menopause. Menopausal women may experience a greatly reduced need for sex and suffer more from mood swings and feeling out of balance. Muira puama was used in this study to assist women with this. The results showed that 65% experienced an improvement in several areas:

Muira puama is not only known as a natural aphrodisiac and remedy for erectile dysfunction, but is also used for other medicinal purposes. Several studies have been done to confirm this. Muira puama has a beneficial effect on the central nervous system and can contribute to general well-being in several ways. Problems with the central nervous system, including memory loss, have been treated for centuries with the help of Muira puama. Meanwhile, science has also confirmed this in studies with mice. One of these studies, done in 2003 by Brazilian scientists showed that the memory of both young and old mice could be improved using an extract of Muira puama. Thus, Muira puama could have interesting properties for people suffering from Alzheimer's disease. A further 2004 study, also with mice, showed that Muira puama protected the diversity of neurological cells. This was thought to be due in part to its antioxidant properties.

The properties further have a stress relieving effect and counteract fatigue. Furthermore, Muira puama has an adaptogenic effect. An adaptogen is a substance that adapts to your body and brings it more in balance. The effect is different, depending on the state of your body. Bringing more peace, or providing more energy.

To increase the medicinal effects of Muira puama, you can combine it with certain nutritional supplements and foods.

Research shows that Muira puama in combination with ginger can have a beneficial effect on muscle strength and reduce muscle degradation. A suitable combination for people who like to exercise or who benefit from extra support of muscle strength.

Ginger also gives a warming feeling, which is positive for having sex. Gold spice - Fermented Ginger Turmeric, is a food supplement from Living Nutrition with a fermented ginger extract. For best results, it is advised to take one to two capsules daily and drink a cup of Muira puama tea daily.

In the range of Sirius you will find several aphrodisiac herbs and products. A sexually stimulating product from The Chocolate Love Company contains Muira puama as an ingredient. Further complemented is another aphrodisiac Damiana and of course cocoa. Take one bonbon per person, and don't wait to have sex until the effects become noticeable. 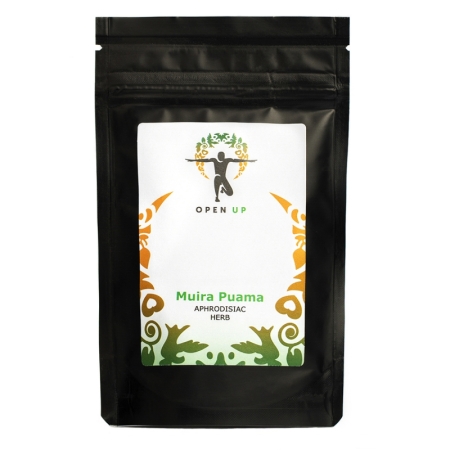 Muira Puama herbs by our brand Open Up.